Perhaps you’ve been rewatching your favorite period drama and something caught your eye that you’ve never noticed before - the dashing love interest isn’t the only gorgeous thing in the production. That winged leather chair in the curmudgeonly old duke’s study is to die for!

Now you’re wondering if you could incorporate a chair like that in your own home without it sticking out like a sore thumb. Well, I’ve got some good news for you.

Wing chairs are back in, baby! In fact, I myself bought a couple of them to furnish my living room when I bought my house. 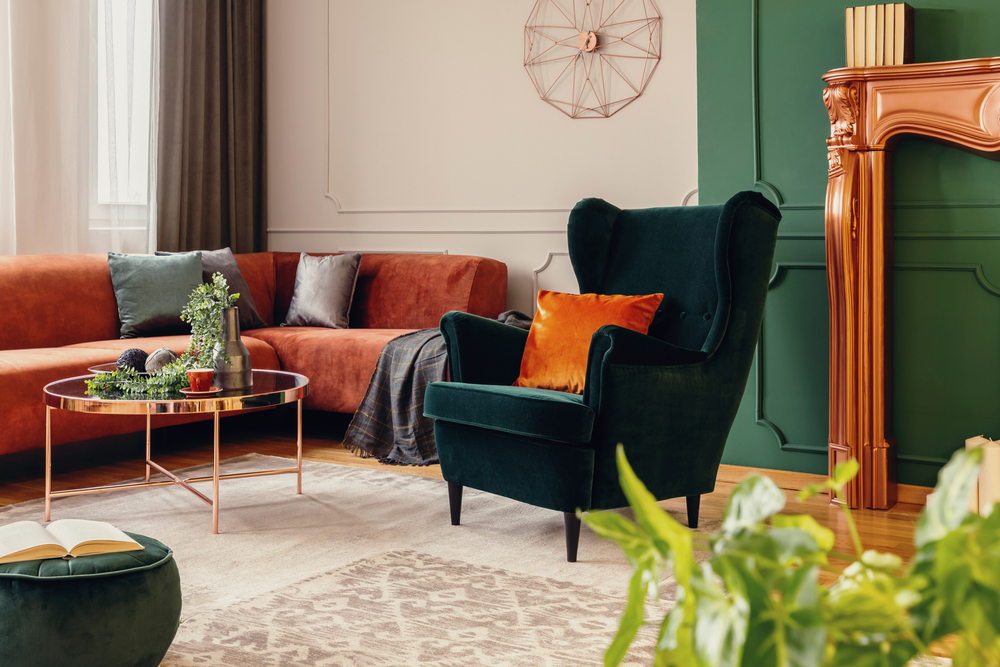 People may think of wing chairs as antiquated, but that’s because they have that grumpy old duke’s chair in mind.

Don’t get me wrong, if you have an in-house library or study with a lot of mahogany and books, perhaps a feature wall or two, there’s no harm sticking with the classic leather style.

But before settling on one from the 1800s, you should hear about all the ways in which talented designers are modernizing this beautiful relic.

The most significant change to the aesthetic of wing chairs is the material. Modern variants tend to use much softer materials that detract from their stately vibe, replacing it with oodles of coziness.

You’ll also find that there are a ton of patterned and plain print options for the materials. The wing chairs I bought have a rich red and beige tartan print.

The massive freedom you have in regard to the upholstery means you don’t have to settle for something that’s not quite right. If you shop around long enough, you’ll find something perfect for your home.

The soft material and homely color profiles of modern wing chairs give them an attention-grabbing, yet low-key presence. They neither dominate a room, nor do they slip into the background. They’re just right.

Modern wing chairs also bring something of timeless elegance to the table. They’d fit right into a country cottage aesthetic without making it look too historic, but they’d just as well make a quirky addition to a hyper-modern home with large open spaces and wide windows.

Another change you’ll notice is that, for the most part, the wings aren’t quite as pronounced - if present at all - and the backs aren’t as tall. This keeps their presence from being too overbearing or ominous.

No longer do they look like something Count Dracula sits on to do his taxes by moonlight in Bran castle.

Not only do modern wing chairs look fantastic, as individual units, but they can also be instrumental in furnishing oddly shaped rooms. My living room, for example, is quite long, which means I had to try and separate it out into two distinct sections using seating.

The two wing chairs I bought allowed me to do so, whilst also giving me the ability to shape the divide - something a singular, blocky sofa wouldn’t have done

Due to the unusual shaping of wing chairs, they can also be used as standalone pieces in pretty much any room of the house with the kitchen perhaps as the exception. Plonk one down in your foyer, your bedroom, conservatory, office, nursery...even a hallway.

Anywhere in your home a normal sofa would look odd and out of place, a tasteful wing chair will look exquisite.

With money enough to buy a few wing chairs, you can even use them as a common thread of interior design throughout your home.

The color profile and feel may change from room to room, but one of these chairs in each of them will really tie it all together in a simple and elegant manner.

If you’re something of a gamer, you’ll be well aware of the relevance of wing chairs. Using race car seating for inspiration, high-end gaming chairs have had wings for going on two decades now. So, as you can see, wing chairs are definitely still stylish, and due to their timeless modern appointments, they’ll stay in vogue indefinitely.

Your next query might be that, being such an old-fashioned design, are wing chairs comfortable enough to bring into your home? Well, I’m happy to report that the answer is a resounding yes!

Of course, not all wing chairs are made equal, and some will be far cozier than others, but generally speaking, they’re a very inviting prospect. The armrests provide ample room for leaning and relaxing your upper extremities, encouraging circulation.

The wings, although not as large as they used to be, create this sense of being caught in a gentle yet loving embrace. The term I’d give the feeling of sitting in a wing chair is pleasantly cocooned.

This encapsulating feeling isn’t so overstated that you feel trapped, rather comforted and rested. I’d even go as far as saying that, as they support you so well and eliminate uncertain open space, sitting in one might help to reduce anxiety.

I’d be remiss if I didn’t mention that when I was shopping around for wing chairs, most of the seat cushions weren’t quite as spongy as standard sofas, but that’s not to say they’re uncomfortable. They offer way more support, promising to be the comfier option in the long run.

Just imagine nestling into your wing chair in front of an open fire of an evening. Can you think of anything cozier? I certainly can’t.

They often also come with lumbar supports as standard, so if you suffer from spinal aches and pains, a wing chair will be far more comfortable than the alternatives.

Although I always try to avoid sleeping upright in sofas or chairs, wing chairs are prime for a good catnap.

It’s devilishly easy to turn, rest your head on the wing, and get a couple of minutes shut-eye, and if it’s easy enough to doze off in, I’d say it’s a comfortable enough option to invite into your home.

Just remember to put down that glass of red on a side table first - I learned that the hard way.