There’s little quite so synonymous with the elderly as a rocking chair (except perhaps gray hair and wrinkles). But the question is whether rocking chairs are good for the elderly.

And this article is going to explore exactly that. We’re going to break the data down, exploring in depth, before wrapping up with a conclusion at the end. (Feel free to scroll ahead if you wish.) 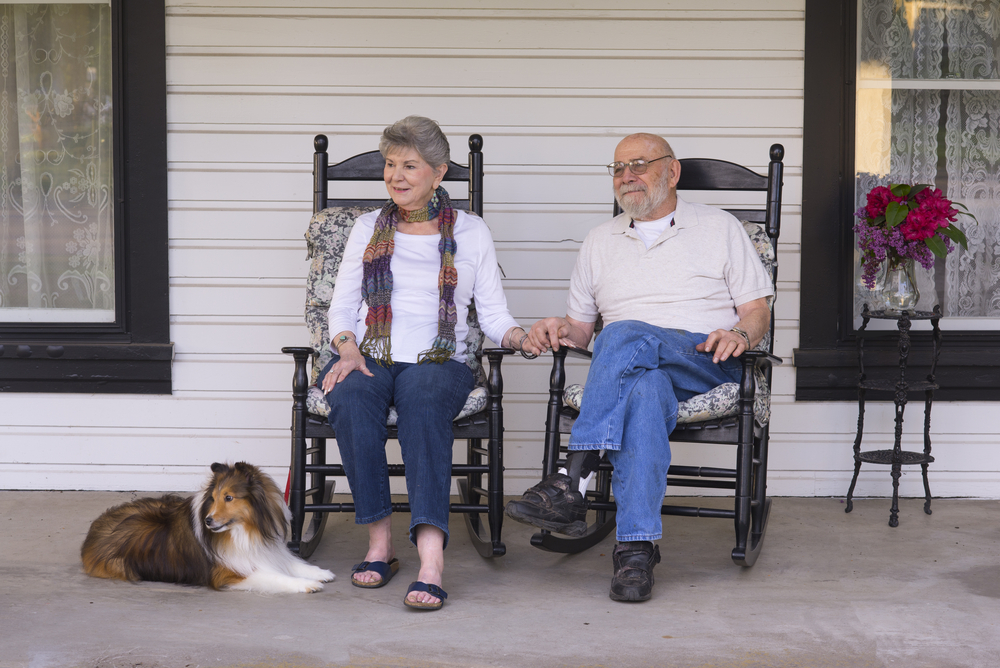 We’ll start by exploring the negatives.

Rocking chairs, recliners, folding chairs and the like, turn out to be responsible for a whopping 81,452 injuries to older adults every year in the USA alone.

We would argue that that’s quite a significant figure, and certainly something worth taking into consideration before buying a rocking chair for an elderly person.

However, this doesn’t all come down to the backward and forward rocking motion of the chair. Elderly people are known to often experience difficulties with their balance, particularly as they get older.

And it is thought that this lack of balance is what’s really responsible for much of these aforementioned injuries. Falls and tumbles around pieces of furniture can happen to anybody, but it is more likely to happen to elderly people and young children.

Improved Balance Thanks To Rocking Chairs

On the flip side, however, it turns out that frequent use of a rocking chair can also help to improve a person’s balance. This finding comes from a lengthy 2-year study carried out by the University of Rochester.

As the chair rocks, the body attempts to balance itself, stimulating the balance mechanism in the inner ear. And as the ability to balance improves, the tendency to trip and fall lessens.

This is particularly good news for people who suffer with Parkinson’s disease, a disease that gets worse with age. Improved balance is considered to make Parkinson’s symptoms more stable.

It’s quite a tricky question to answer, and I guess to answer it, you also have to look at it against the other pros and cons of rocking chairs

The motion of a rocking chair has long been known to increase blood circulation. And this is great news for the elderly because it means there is more oxygen being circulated via the blood to their joints.

This is especially good news for those with cardiovascular disease or any other circulatory ailments.

But that’s not all. This increase in oxygen through the blood can also help to relieve pain and inflammation felt in the joints too, something that can be quite common in the elderly.

You might not think it, but rocking back and forth in a rocking chair, is actually a mild form of exercise. It can strengthen the body’s muscles and help to loosen stiff joints.

This is excellent news for an elderly person who may no longer be able to carry out their previous forms of exercises such as outdoor sports. But this form of exercise requires minimal exertion, and it won’t even feel like exercise to much of them.

Moreover, if they do like to always be doing something, everything doesn’t have to stop just because they are in a rocking chair. They can still knit, read, watch TV, or chat with their companions.

It is commonly known that a light gentle rock back and forth is an excellent way to send someone to sleep who is already a little tired.

And while mothers have been using it to get their babies to sleep since time immemorial, it works just as well on the elderly as it does on young babies and infants.

But that’s not the whole story. Frequent use of a rocking chair has been shown to combat insomnia, AND improve the quality of your sleep as well.

Which is just what the doctor ordered for an elderly person whose daily tasks now seem to require more exertion than when they were young.

Rocking back and forth in a rocking chair has a distinct soothing and calming effect, that can not only soothe troubled and anxious minds, but can also have a invigorating effect on those who are feeling a little down and depressed.

The rocking motion can induce meditation which is especially calming. And, moreover, it can also induce the release of endorphins in the brain, and this in turn can also improve your mood and reduce tension and stress.

So as you can see, there are very many benefits to rocking chairs for the elderly. These benefits include the likes of providing moderate exercise, improving balance, help with sleep onset and sleep quality, improving blood circulation, and improving mental health and well being.

The health benefits apply to everybody, not just the elderly, but there are specific groups of elderly people that it can be particularly beneficial to.

But as we have already mentioned, accidents with elderly caused by rocking chairs fall into the hundreds of thousands in the USA alone.

But on reflection, weighing up all the pros and cons, it would seem there is more to gain in a rocking chair for the elderly than there is to lose, and we would wholeheartedly recommend investing in one.