It isn’t bad to put a couch in front of a window, you just need to be careful not to block the natural light. If you only have one window, be careful to position the couch so that the light is still visible.

You should also aim to leave a small gap between the couch and the window, for ease of movement. 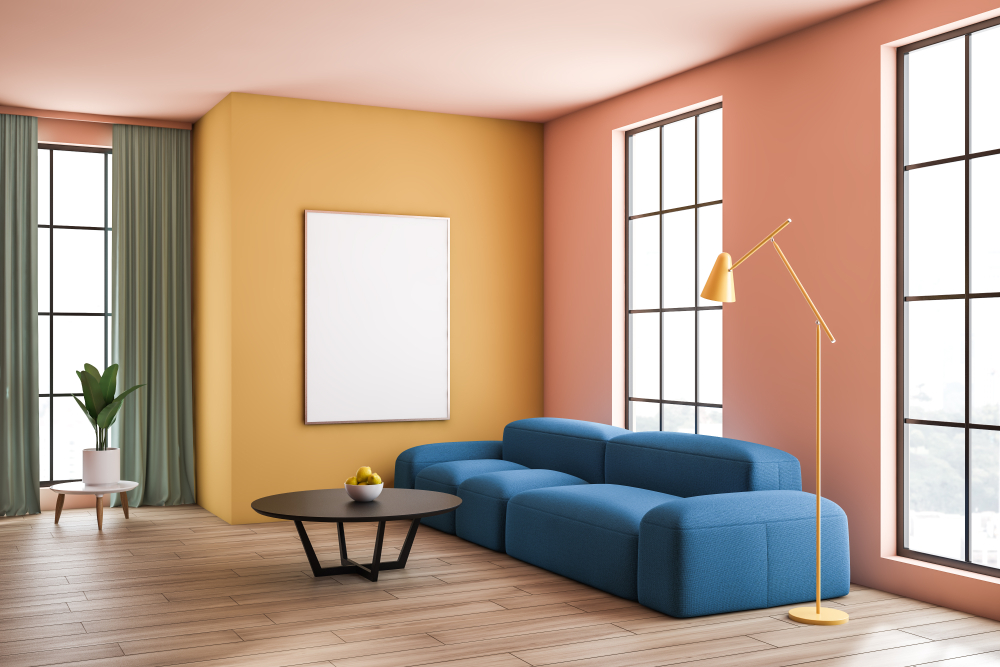 In many rooms, it’s often unavoidable to put a couch in front of a window. Especially once you factor in sockets, heaters, and bulky shelving units. You may have been warned against placing a couch next to a window, without ever really knowing why.

However, if you have to place furniture in front of a window, a couch may be the best option.

The main concern when placing furniture near windows is blocking natural light. We all need as much natural light as possible, for both our health and our mood.

A window lets light in, and you don’t want to prevent this. A poorly placed couch can cover parts of the window and darken a room.

Unless you have a particularly large couch, or a very small window, light blocking probably won’t be a problem. In fact, couches are a better choice than other furniture. Couches generally have low backs, so they don’t rise up high enough to cover the light source.

If you regularly use your couch for activities like reading, the window will provide you with the best source of light. On the other hand, something like a bookcase or cabinet can fully block the window.

The window itself also needs to be considered. If you have pets or children, you’ll know how easily a couch adapts to a climbing frame. When it’s placed in front of the window, this can be a danger.

If a child or toddler leans against the window, there is a chance it can break. This is something you must be aware of.

Placing a couch in front of a window tends to frame the space. This can be lovely, but it can also draw attention to a less attractive area. Especially for city dwellers, the view out the window may be one you don’t particularly care for. Placing the couch underneath will draw the eye over.

However, overall there is no issue with placing a couch in front of a window. A low backed couch will let light in, and be a comfortable seating area. Be sure to pull the couch at least 3 inches from the window, to allow air to circulate and to hang curtains.

For a floor length window, look for a bench or window seat. This lets the light shine through, and provides a welcoming seating area.

Can you put curtains behind a couch?

You can put curtains behind a couch, you just may find them a little harder to access. Ideally, there will be enough room between the curtains and the couch, so they can hang properly and let the air circulate.

The main issue with putting curtains behind the couch is that the couch will hinder movement. In the short term you may not notice, but it can become frustrating after a while. Steer clear of choosing floor length curtains, and instead look for a set that only hangs to the frame.

Shorter curtains will be easier to move back and forth, and as they won’t be trapped by the sofa back they can drape better.

Although long curtains can frame the couch when open, they’ll become frustrating when they need to be closed. Often, you’ll find long curtains have a tendency to get pinned in.

If you have a smaller window or a larger couch, you may consider avoiding hanging curtains to allow for the most light to enter the room. This has its advantages and disadvantages. The additional light will open up a room.

The big issue is privacy, especially if you sit on the couch often and in the evenings. Even a light pair of curtains will grant some level of privacy, so any type of window covering is better than none at all. Look for blinds, which are easily maneuvered and not as heavy as curtains.

There are some stylistic pitfalls to placing a curtain behind a couch. Be sure to choose curtains that complement the fabric of the sofa (and vice versa). The combination of windows, couch, and curtains brings a great deal of focus to one place, so everything needs to work harmoniously.

However, avoid anything that matches too much. This will make the couch disappear into the curtains. Instead, look for a slight contrast or complementary colors. If you have a pattern on the sofa, choose a block color for the curtain.

The color can pick out the pattern without being overly coordinated. Or if the sofa is a solid color, try patterned curtains. You can also play with texture and weight. Balance a heavy fabric sofa with lighter linen curtains.

There should be a gap of at least 3 inches behind the couch and the curtains. This is important for the drape of the fabric, and also for keeping the curtains clean.

Be careful if you have pets or young children in the house. Couches provide convenient climbing apparatus, and curtains are at risk of being pulled down by particularly enthusiastic climbers.

Curtains behind a couch are often a necessity of the space. A shorter length is better for ease of use. Try and leave as large a gap as possible, for both the look and safety of the curtains. Choose fabrics and colors that complement each other without matching too closely.