Sometimes life isn’t what we hoped, and we end up sleeping on the couch temporarily, or sometimes that temporary arrangement becomes a permanent one.

Contents show
1 So, what can you expect to happen to the couch you are sleeping on all the time?
2 Can you sleep on a sofa?

It can be due to finances, temporary living arrangements, or even just a compromise with the family. It could be that your partner is sick of your snoring and sent you to sleep on the couch, and you both just prefer it. 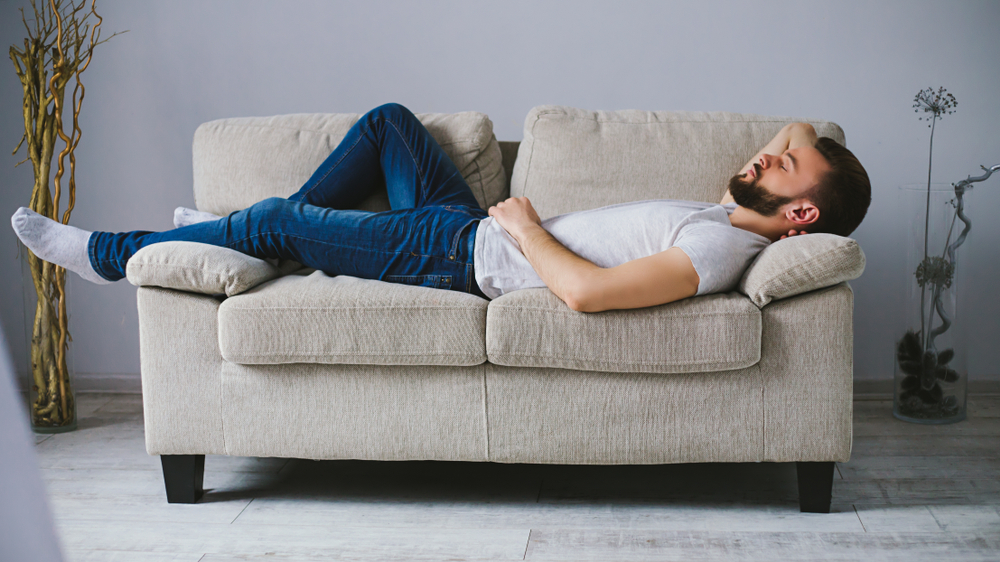 Sleeping on a couch occasionally will not do any real harm, it might give you some back pain when you do, but the couch will not suffer for it. However, if you sleep on the couch permanently, or on a long-term basis, then you may see some problems arise.

You may eventually find that some parts of your couch are worse affected than others. Of course, this also depends on the height and weight of the sleeper, as well as the position in which they sleep.

It also depends on whether or not any bed linen is used between the sleeper and the couch.

Depending on how the couch is slept on you may even see some upholstery damage, fabric covered couches may also require frequent cleaning, especially if the couch is used as a long-term sleeping arrangement.

This frequent cleaning will also then reduce the lifespan of the couch as well.

So, what can you expect to happen to the couch you are sleeping on all the time?

Well, you might expect the couch cushions to begin to sag. By this we mean the seat cushions, they will start sagging in the places where the body weight is at its greatest on a regular basis. In a normal sleeper, the greatest amount of weight is around the midriff and the hips.

This will likely cause the center seat to develop more of a sag than the other areas of the couch. This could also be the end game of an inferior cushion material that will break down with use.

Another issue that may arise is depressed foam. This means that areas in which pressure is placed on the foam padding of the upholstery on a regular basis may eventually become and remain depressed.

Unless the foam has a high-recovery factor which is a reading that is based on the force deflection standards of indentation by the foam industry.

One thing you may not expect to happen as a result of sleeping on a couch is damage to the covers. If you sleep on a couch regularly then you should always use linen or a blanket between your body and the couch.

Regular contact with the cover of the couch will end up resulting in scuffs and the wearing down of the material. Think about leather look sofas and how you can always tell which seat is most used.

This is much like that. You can ease the effects by steam cleaning your couch, however in the long term this will still lessen the life-span of your furniture.

No one is a perfect sleeper, and it is very rare that people stay as still as a log when they sleep. Most people toss and turn as they slumber and dream, and so this can do even more damage, not just to the covering, but also to the framework of the couch.

Couches are designed for people to sit down comfortable and consciously, unconscious movement can be a lot more vigorous and violent, such as when we are sleeping. This can cause broken supports.

And, a broken support will require opening up the upholstery to repair it and will probably require the assistance and attention of a professional upholsterer to fix it.

It is much better to just avoid this issue all together and to try and sleep somewhere else, as fixing an issue like this will be far from cheap.

Can you sleep on a sofa?

This isn’t to say you can’t nap on your couch, or that you can’t sleep on a couch from time to time. But, it is best to avoid a long-term sleeping arrangement on a couch if you want your couch to stay happy and healthy, looking good, and in one piece.

There is an alternative measure that you can take to prevent these issues from happening. If you expect that your sofa may at some point be used as a bed, you can always buy a sofa bed.

These sofas are made with sleep in mind, they often have pull out beds, or their upholstery and design are designed to be both sofa and bed.

This means that you can avoid all the above-mentioned issues, just by preparing for this situation and having a sofa that can accommodate sleepers.

Normal sofas are not made with sleep in mind, and sleeping on one all the time can do extensive damage to the sofa, and it won’t be all that comfortable for you either.

They do not have a mattress or any spinal protection and most of the time, sleeping on the couch will result in some back pain, aches, and occasional nerve issues. Sleeping on a bed is best for you and your couch.

However, if you do not have any alternative, and you cannot get away from the issue, maybe get a mattress topper, or use bedding to separate you from the couch. Doing this will save the couch.

It is, of course, even better if you can get a sofa bed, as this will not damage the cushions, upholstery, and there is no risk of the supports breaking as a result.

Moreover, you will probably get a better quality of sleep, and the chances of you waking up with aches and pains is much less likely.