If it’s not in good enough condition to sell, then you can either donate it or get rid of it another way. It might sound like a lot of unnecessary stress, but it’s a whole lot better for the world (and less illegal) than abandoning it on the curb would be.

Try posting about it on local Facebook or Craigslist pages for your area, offering it for free if they come to collect - or, if you’re able to, offer to drop it off for them, as this will probably encourage the new recipient to take it off your hands a lot quicker. 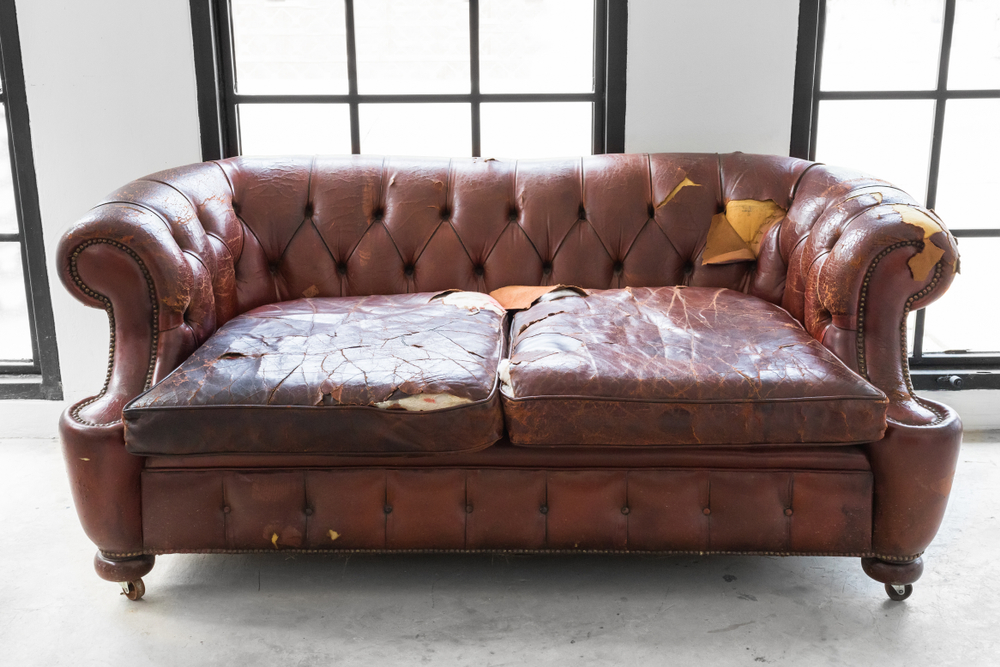 If it’s so old and used that nobody would consider taking it for free, there are companies you can pay to come and remove it for you, usually fairly inexpensively. They will then find an efficient and eco-friendly way to dispose of it.

Plus, if you’ve already ordered a new sofa to replace the old one, there’s a high chance that the folks who are delivering it can also haul the old one away for you, though you’ll have to get in touch with the business in question and ask first.

You may also be able to offload it on a local scrap yard if they’re willing to take it, but you’ll probably have to pay a small cost to have them come and pick it up. Should you be able to drop it off to them, they might be able to pay you a little!

Otherwise, you’re looking at taking the whole thing apart yourself and disposing of it in your nearest dumpster, though you’ll have to have an arsenal of tools on hand in order to do this effectively.

Can I take a sofa to the dump?

Probably not in one piece, no! If you want to take your old couch to the dump, you’re going to have to dismantle it before you can properly dispose of everything in a safe and legal way.

First things first, take off all the cushions and have a check for loose change or other random items that you might not want to throw away. It’s incredibly easy to lose things in your sofa and forget about them, so don’t skip this step!

Once you’ve scavenged anything worth taking, it’s time to flip it over or lay it down on its back, so you can unscrew (or rip off, depending on the sofa) its legs. Using a screwdriver, staple puller or anything else that works, tear off all of the upholstery.

Now it’s looking all ugly and bare, you should finally disassemble the wooden frame (if it’s metal, you might get some cash for it down at the scrapyard, but you’ll probably have to transport it there yourself or pay their removal feels) and you’re done!

Then you can separate everything into trash bags and head to the dump, safe in the knowledge that you won’t get turned away, which you probably would if you just showed up with a full sofa!

However, it’s always worth a quick phone call, as the rules in every state or area are different. It’s possible your dump will accept the whole couch in one piece, but you’ll only know if you phone up and ask.

How can I get rid of my couch fast?

Your first instinct might be to leave it out at the curb with a big old sign on it that says FREE. Whilst this is definitely an option, in some states, it’s considered flytipping and is illegal, so you could land yourself a huge fine or even jail time for doing so.

What you can do is put it out on the curb and then post on your local Facebook dumpster diving or free pick up pages, or even just the pages for your local area, advertising that there is a couch for pickup to whoever arrives first.

Hopefully, that way it’ll be gone ASAP - you don’t even have to take it outside to do so, either. You could wait until the collector is on their way to pick it up, so it doesn’t become an eyesore and you don’t get complaints from neighbors.

The easiest way to get rid of it involves paying: find out who your nearest and most reputable junk removal company is, then book them to come and take the couch away for you. It usually doesn’t cost that much just for one item.

You could also hack it to pieces and take it down to the dump if you feel like it’s not in a good enough condition to donate to somebody. Do remember, though, that one man’s trash is another man’s treasure - it could come up great after a thorough clean!

How can I get rid of old furniture for free?

The easiest way is to take advantage of social media. These days there are thousands of local buy and sell groups on Facebook, Reddit, and Craigslist, many of which are specifically for donating old, unwanted furniture to be collected.

Posting on the relevant groups for you with photos of the furniture and how much (if anything) you’d like for it is simple enough, and you can even specify that the items are for collection only if you don’t have any methods of dropping them off.

You’ll also find that many charity organizations and thrift stores alike will collect old furniture that’s in a resaleable condition. As long as it can still be used as intended and there isn’t any significant damage, cosmetic or otherwise, you should be good to go.

One good place to get in touch with if you have no luck trying the above tactics are Freecycle, a non-profit organization that works across the world and has hundreds, if not thousands, of volunteers in just about every state.

There’s sure to be someone in one of your local Freecycling groups who want your stuff! All you have to do is list it on there or on Facebook Marketplace as a “curb alert” and then put it outside your house - it’s a given someone will come to take it.

How do I get rid of a sleeper sofa?

Also referred to as a couch bed, these bad boys can be trickier to dispose of because of their more complicated internal mechanisms. Unlike a regular sofa, you can’t just hack it to bits and take it to the dump.

That being said, you can still use all of the other methods of donating furniture, like posting about it online. Because it’s a bed AND a sofa, people will definitely be less likely to take it if it looks stained or dirty, so perhaps give it a good clean beforehand.

However, if you’re desperate to get rid of it and you don’t have time to waste to clean it up and make it look pretty, you can always list it as free to a good home on your local area’s Facebook groups, or put it on Reddit or Craigslist.

As long as you specify what kind of condition it’s in, then it should be fine. You’re giving it away for free after all, so people can’t really afford to be picky about it, right?