The humble end table is a piece of furniture that is often overlooked due to its small size and often nondescript positioning in a room.

Contents show
1 What Is An End Table?
2 How Far Should An End Table Be From A Couch?
3 Should End Tables Be The Same Height As The Couch
4 What Is The Difference Between A Side Table And An End Table? 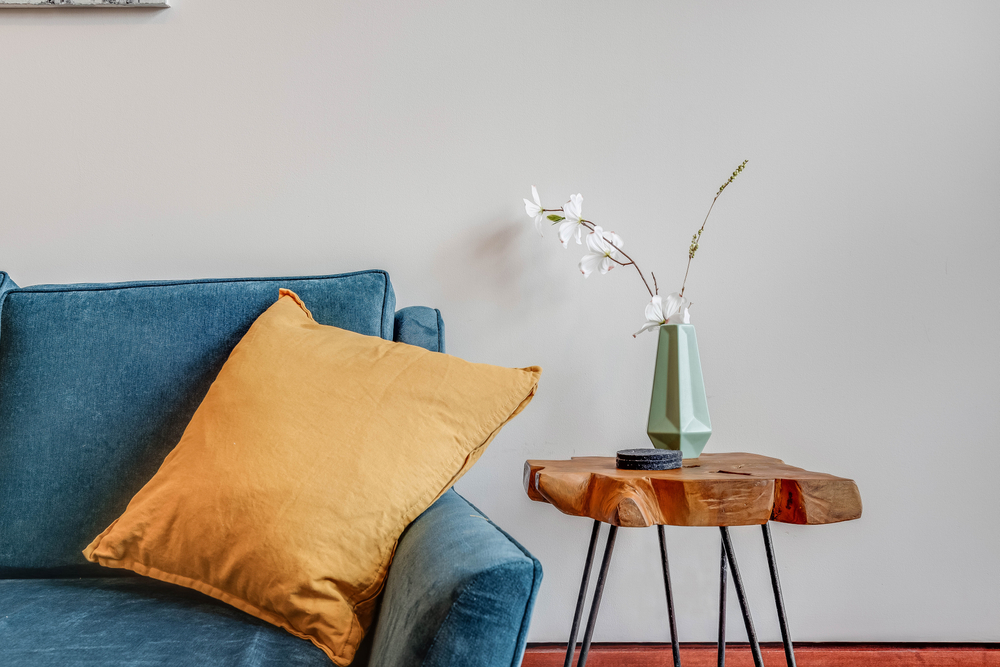 If you’re not familiar with this, it wouldn’t be surprising, as these small tables are often surrounded by larger, more commanding furniture that makes up the centerpiece of most living areas.

However, the end table is one of the most useful types of furniture and they can also add an extra dimension to your interior design if chosen carefully and positioned well.

In this guide we’re going to look at what end tables are actually used for, and how to get the most out of them, as well as some other ideas about positioning in the room and in relation to other pieces of furniture.

What Is An End Table?

The end table, true to its name, is an often small table that is located near to the end of a piece of furniture, commonly a sofa, and is useful for occupying small empty spaces in a room and holding various useful items from lamps, to books to various other items you’d like to be able to reach without getting up off that comfortable sofa!

Although small and overlooked, they play an important role in the comfort of your home and allow you to access things easily and keep things visible, and while this may sound simple, positioning an end table to maximize its virtues is a difficult task, especially in relation to other furniture.

Let’s take a look at how to avoid problems when positioning your new end table.

How Far Should An End Table Be From A Couch?

While it may seem excessive or even obsessive to measure the distance between your sofa and your end table, it’s really important to take this seriously as it can save you a lot of issues later and add a lot to your comfort once you’re settled and relaxing!

For most sofas, the end table should be no more than a foot away from the edge of the sofa or chair that it’s accompanying, but ideally, it should be close to 4 or 6 inches depending on the design of the chair and available space, as well as the design of the table.

The closer your table is, the more easily it will be able to provide you with access to your drinks, lamp, books, or whatever else you’re using the end table for.

This will make it much easier to use and much more comfortable. If the table is placed too far away from the sofa, then it negates the purpose and function of the table almost entirely as you’ll have to leave the sofa to use it or retrieve whatever items you want from it.

Should End Tables Be The Same Height As The Couch

This is an interesting question and there is some debate about this, particularly by interior designers who often push the limits of design and try to experiment with new and interesting concepts and aesthetics.

For most people, however, end tables should ideally be the same or a similar height as the couch or chair they are serving, as this will enable the person sitting on the couch to easily be able to reach or use the end table for whatever reason they need to.

An end table that is much lower than the sofa can again cause issues with reach and make the end table a poor choice as it is unable to serve its most essential intended purpose properly.

There are some instances where a lower end table may be acceptable, but these are often very specific circumstances that won’t come up in most people’s homes.

Certain sofas can be lower than others, or not use arms as most sofas do, which makes a lower end table much more acceptable and even ideal, as in these cases an end table as high as the seat of the sofa should be adequate.

This of course relies on the user still being able to reach the sofa, and only works with designs that are armless such as daybed style sofas or futons, or maybe a chaise in some cases.

Even those sofas with low arms often still require an adequately high end table in order to make the best use of them, so take care with the height of your table to ensure it’s in sync with your furniture.

It’s also possible to have an end table be too high, and again this is often unacceptable as the table will be out of reach of the sofa and impossible to use properly.

Sometimes a higher end table can be used, especially for mounting a lamp or other such item, but generally, a table that is too high is as bad a choice as one which is too low.

What Is The Difference Between A Side Table And An End Table?

While they appear similar there are some key differences between a side table and an end table.

The first is that a side table is usually positioned in the open and is an accent piece that often stands out much more than an end table which sits secluded near larger furniture.

Side tables are also usually larger than end tables in terms of surface area and height and are usually much more of a showpiece.