Slipper chairs can vary slightly in shape and style. But all slipper chairs are low to the ground, well-cushioned, with short legs.

The reason why they are called slipper chairs, and why they are so low to the ground, is because they were traditionally used by maid’s to help their female employer put on their shoes. They originated around the 18th century. 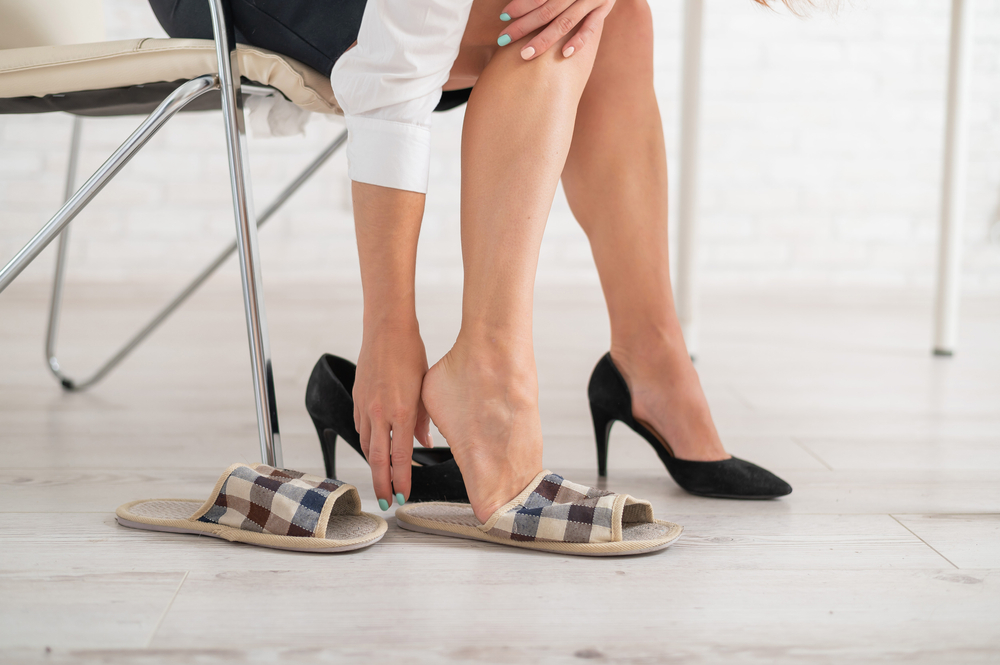 They are specifically called “slipper” chairs because small, dainty, soft shoes were traditionally called slippers. The term slipper is now used to describe soft, fluffy shoes worn around the house, usually with pajamas.

But this is not the type of shoe that was considered to be a slipper in the 18th century. That said, they would have very rarely been worn outdoors.

In the 18th century, the chairs would rarely have been sat on for long periods of time. They were primarily intended for maids to sit on, rather than have them kneel on the floor.

Today, they are primarily used as additional seating in a bedroom or a living room. They are not generally used as the main seating.

Despite this, slipper chairs are very comfortable. However, they are unique in how low to the ground they are, as well as the fact that the back is at an angle. These are very low, deep chairs. So, if you have mobility issues and struggle with low seating, this might be a little difficult.

Can you use a slipper chair as a desk chair?

Technically, yes, but it isn’t a great idea. Slipper chairs are much better suited for relaxing and reclining. This is primarily due to how low they are to the ground. Most desks will be far too high for a slipper chair.

You will also need to sit up straight when working at a desk. And your back needs to be supported in this upright position. Neither of which a slipper chair can provide you with. This isn’t necessarily a bad thing. But it isn’t suitable for a desk.

What is the best chair for a bedroom?

Slipper chairs were originally intended to be used in bedrooms, so they are a great idea. Slipper chairs are perfect for sitting up in to read before bed, to put on your shoes before going out, or for putting on lotion after a shower.

A slipper chair will generally be more of a decorative item than practical. This might seem excessive, but they can be used in certain situations.

Most people use their bedroom chairs for those clothes that aren’t quite dirty enough to be washed but have been worn and so shouldn’t be put back in the closet. So you can always use a slipper chair for this. (That said, this will ruin the look a fair bit.)

Can I use a dining chair as an occasional chair?

Slipper chairs are often used as occasional chairs. This is because, as mentioned above, they are primarily used for decoration, and only sometimes for practical purposes. But, if you want to use your occasional chair a little more often, a dining chair can replace a slipper chair.

Dining chairs will usually have a straighter back and be much more raised. This is in direct contrast to most slipper chairs. Depending on the style you choose, dining chairs can look a little out of place in a bedroom.

But, if you choose carefully and pick something that suits the aesthetic of your bedroom, a dining chair will be absolutely fine.

Especially if there will be a table in between the chairs. Slipper chairs will look best with a low coffee table between them. So if you choose a more raised dining chair, it’s best to have a raised table as well.

What do you call a chair in your bedroom?

There are certain chairs, such as slipper chairs, that are often used in bedrooms. But this doesn’t mean that you have to use a particular style in your bedroom.

Can accent chairs be used as dining chairs?

When it comes to choosing chairs, the main consideration should be height. Even when you’re choosing an occasional chair. The shape, style, color, and cushioning are all secondary. This is because height is the most important practical consideration.

When choosing a dining chair, consider how it will fit around your dining table. If you have not yet chosen your dining table, then it’s a good idea to choose this first, as it will be the main feature. When it comes to dining, the table is very important in terms of practicality.

Most accent and occasional chairs will be lower to the ground and designed for lounging and reclining. So it’s important to consider whether you will actually be able to sit up and eat in them.

Which is, after all, the most important consideration. No matter how beautiful the chairs look, this won’t help if they are impractical.

Where do you put an occasional chair?

In a bedroom, the bed will usually be up against one wall. On the opposite side of the room, the occasional chairs should be arranged to face the bed, but also slightly inward. In a living room, the sofa can be in different places, but the chairs should face the sofa in the same way.