A bean bag is a perfect place to sulk. You can sink way down deep and sulk for hours. You only have to stick your head up once in a while to see if anyone cares - Charles Schultz

Contents show
1 Making The Repair
2 How Can You Glue A Bean Bag?

Flopping into a bean bag at the end of a long hard day is one of life’s secret, guilty little pleasures.

Whether you like to curl up in a bean bag, sprawl out in one, or just sit there and watch the world pass by in it, you’ll know that when you’re locked in its comforting embrace there’s very little, if anything, in the world that’ll ever make you want to leave. 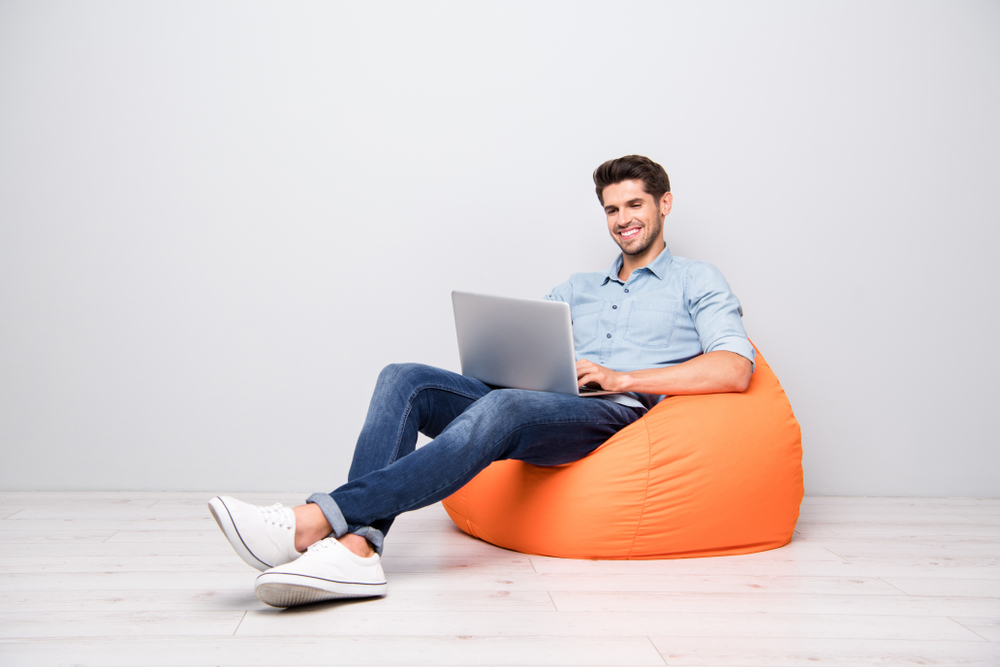 It might not seem like it’s special and might not mean much to everyone else, but over time you develop a bond with your bean bag, it’s yours and yours alone.

No two bean bags are the same, and while it wouldn’t break your piggy bank if you were forced to replace it if you did, it just wouldn’t be the same.

We get it, we’re exactly the same and we know how catastrophic it can be when you start seeing the beans that should inside your bag start appearing outside your bean bag. When they appear, it can only mean one thing.

There’s a hole in your bean bag, and however that hole appeared, whether it ripped, was torn, or punctured, it doesn’t matter, the end result is the same. Your beloved bean bags days are numbered, and the amount of time that you have left to spend with, and enjoy it, is limited.

Or at least it would be if you couldn’t patch it up and fix it, and make it almost as good as new. And we’re to tell you exactly how you can repair your bean bag and make sure that from now on, the beans stay where they should. On the inside.

Before you start thinking about performing life-saving surgery on your bean bag, you’ll need to assemble the equipment that the procedure requires. You’ll need a cup, four or five large plastic bags, a cloth, an iron, and a kit to patch the hole.

First things first, you need to make sure that the beans are separated from the bag and stored safely.

Open the zipper (every bag has a zipper, take a couple of minutes to find it if you don’t already know where it is - it might be covered by a velcro seal, and if it is, just undo the velcro and then unzip the zipper), and slowly and methodically use the cup to scoop up the beans from inside the bag and pour them into the bags.

When you finished removing all of the beans from inside your bag, fasten the plastic bags that they’re in and store them somewhere where you know that they’re going to be safe from inquisitive little hands or the insatiable curiosity of your cat.

Once your bean bag is empty, turn it inside out and give it a good hard shake. There will inevitably be some beans left inside, there always is no matter how diligent you think you’ve been, and once they’ve been shaken free, gather them up and put them in the cup.

Put the cup with the plastic bags full of beans, and plug the iron into the nearest available socket. Examine your bean bag carefully and find the hole, tear or puncture that you’re going to need to repair.

After you’ve located the tear, take one of the iron-on patches and place it over the hole, making sure that the tear is fully covered and there’s at least an additional centimeter of patch on all sides of the tear.

Pick up the cloth, and lay it flat over the patch. By now the iron should be hot enough for you to begin to fix your bean bag.

Pick the iron up and use it to gently smooth the cloth in a slow back and forth motion. The heat in the cloth will be passed through to the iron-on patch, which will then activate the glue and ensure that the patch sticks to your bean bag.

When you’re sure that the patch has stuck firmly to your bean bag, stop ironing the cloth, make sure you put the iron away safely, and unplug it from the socket. Lift the cloth of your bean bag and leave the patch and the bag alone for a couple of minutes to cool down.

As soon as you're sure that the patch has cooled down, make sure that it’s stuck firmly to your bean bag by giving it a little tug. If it hasn’t stuck, repeat the process with the iron and the cloth until it does stick. It might take a couple of attempts, but eventually, the patch will stick.

When you’re satisfied that all is well, turn your bean bag the right way out again, and slowly, but surely start to pour the beans back into the bag using the cup. Then, when you’ve finished, zip your bag back up again, and it’ll be as good as new.

How Can You Glue A Bean Bag?

Theoretically, you could glue a bean bag by emptying it, turning it inside out, and using super glue to glue the hole together, but we wouldn’t recommend trying to do it as things could get messy.

You could end up getting stuck to your bean bag, which would mean a trip to the emergency room and having to explain what happened to the attending surgeon.

And trying to persuade your insurance that emergency super glue removal should be included under the terms of your policy is a headache that no one needs or wants.

It’s better to just avoid the whole “can I glue my bean bag” dilemma by fixing it the right way and doing it properly the first time. With an iron, a cloth, and a patch. It’s easy, it works and it’ll take you less than thirty minutes to save your bean bag.